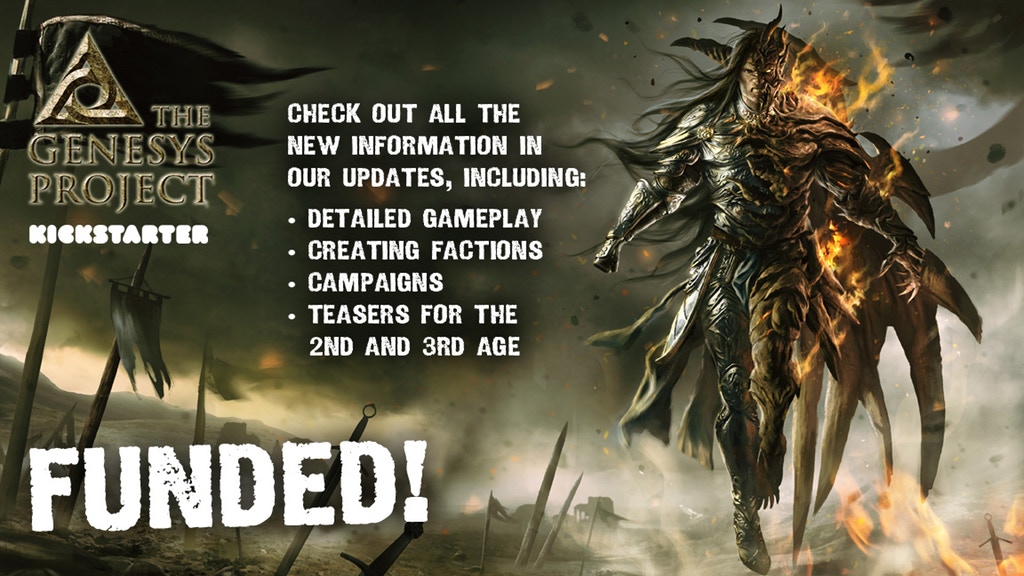 The Genesys Project: The Birth of Genesys

The Genesys Project is a Customizable Tabletop Miniatures game where you create your own faction and customize your equipment.

Latest Updates from Our Project:

Just over 48 hours left and we passed our Stretch Goal adding additional content for the Humanoids. Remarkable, and I will be jumping on it right away.

I also want to backers to know that yesterday in our meeting we decided to add a "Strategy Guide" to the game. This will be available later (for free) as a pdf and will be available on the Genesys Games website. www.genesysgames.com. The Strategy Guide will be insight not only from myself, but directly from playtesters who have been involved in the playing and direction of the game for years, including a couple from the very beginning! The goal is to get their insights and opinions into creating factions, gameplay, and more.

Also, here is a draft of the QuickPlay Reference Sheet laid out for this Kickstarter. The one that will come in the books will be more refined.

You can see it here, or download the pdf at this link. https://www.dropbox.com/s/7ovwwju62fsuisf/GP_QuickPlaySheetDraftV1.pdf?dl=0

Coming Down To The Wire!

We're coming toward the end of this Kickstarter campaign, and we're very appreciative of all the support, comments, and questions we've had so far. We've tried to give you some great insight into not only the gameplay, but also the unique Faction Creation System at the core of The Genesys Project. You, our backers, are aware of all of these updates, but those who will be returning to look at the campaign over the next few days might not. Please let your gaming group know that there is plenty to catch up on!

During our first 48 hours we said that everyone who pledged would receive the Primitive Age PDF absolutely free. That tuned out to be 120 backers, on the dot. So, if your backer number for this project is 120 or less, you'll receive the Primitive Age PDF gratis. If your number is 121 or higher, you can now add it to your pledge for just $5. This PDF will be available alongside everything else.

We've made a slight adjustment to our announced stretch goals, reducing the target numbers, and we've decided to keep the campaign going through the BackerKit pledge manager/pre-order store process. We'll announce a few more goals before the KS campaign ends, and those will still apply to the support we receive through BackerKit (we are very keen to make the books the best we possibly can).

We are approaching the final days of the Kickstarter and showing off our final updates in the next few days. There has been a ton of information given to really highlight the game and its worth while to share with as many people as you can. There are 4 days left!

Monsters are at the heart of The Genesys Project, from the 1st Age through to future Ages. They can be customized within your own faction with a lot of versatility, from monstrous mounts to thundering dinosaurs, or even creating an entire army of Monsters!

Every Faction has the opportunity to Monsters, including Humanoids, Fey, Insekts, and Biests. As with most things in The Genesys Project, Monsters are built using traits, specifically through Class Traits called Monstrous Traits. These are taken when creating a new class, taking up one of your Class Traits slots. (It’s always important to remember that as you play games you can add additional classes to your faction.)

When you select a Monstrous Trait, you transform the class into a Monster no longer genetically attached to your faction and swap out your Starting Characteristics for a new set of Monstrous Characteristics. You also lose those Faction Traits the rest of your race/species already has and take new ones selected in a section of the book dedicated to Monsters.


MONSTERS OF MYTH AND LEGEND

Creating Monsters means gaining access to an entirely new section of traits designed to customize your monsters called Monsters of Myth and Legend. Here you can create something familiar like Griffons, Drakes, Large Mounts, and even hybrids like Chimeras, to something completely unique and new to your faction.

Monsters of Myth and Legend Traits: Biestial Monster (Taurus) - Powerful Charger, Thundering Charge (gives trample to run over models and stuns), Stone Body (makes him tougher with additional wounds), Rare Metal Infusion - Adamantine (the creature is literally made of it), Horns (natural weapon) with Massive (a morph to enhance our trample).

Extra Class Characteristics added to Movement and Strength. (helps with trample and additional movement since we are taking a -1 to movement from Stone Body).

When creating our Monster, we took very specific traits from both the Biests (our starting Domain) and we jumped over to the Fey from within the Monsters of Myth of Legend traits gaining access to the Earth Sphere of Influence to create an Adamantine bull monster able to trample over enemy formations.

While most Monsters are created as a specific class here and there within a faction, there are those that go even further, creating entire factions of Monsters. This could be a Beastmaster, who rules with an iron fist over his Monsters or a Monster itself who controls and rules all others. There are more than a couple ways of doing this (especially if you are a Biest player):

· Creating individual Unit Classes that each have access to Monstrous Traits.

· Taking a Monstrous Trait with Forbidden Lore (my favorite) and slowly (or quickly during creation) transforming your entire faction into Monsters. It should be noted that Class Traits taken are not replaced, only Faction Traits.

If there is any Domain that can build Monsters better than others, it’s the Biests. Biests have a unique take on Monsters, as they can make a race with Monstrous Traits within their species traits, essentially creating an entire Faction of Monsters.

Either way you look at it, Monsters can be incredibly flexible, although expensive (in point costs), but allow for a level of customization unparalleled anywhere else.

Next Up: QUICKPLAY SHEET FOR THE GENESYS PROJECT

PREVIEW: MECHA AND POWERED ARMOR IN THE 3RD AGE

In The Genesys Project you can create and play your faction in any of the three ages, or create them in the 1st Age and play them all the way through to the 3rd Age.

The 3rd Age will take The Genesys Project into the Far Distant Future, and one of the primary design elements of the 3rd Age is customization of your futuristic tools of war – Mecha and Powered Armor.

While the things you can do in the 3rd Age are incredibly fun to explore, plugging your cybernetic pilot into a Mecha or a genetically engineered soldier into their advanced Powered Armor are among the favorites awaiting you in The Genesys Project.

The Genesys Project reuses the same central concepts through all three ages and the 3rd Age Mecha and Powered Armor are no different. Core Systems allow a certain amount of customization and layout for your Vehicles, Mecha, and Powered Armor. Of course, you can add more Core Systems to the frames of each by taking traits that allow more “advanced” designs.

Core Systems give you the capacity of equipment and weapon systems that can be fit into/onto the Vehicles, Mecha, and Powered Armor. How many Core Systems that can be added to a mecha or powered armor depends upon the size of the frame. Through the Traits system you may have advanced technology to allow additional Core Systems as well as other types of futuristic upgrades.

Mecha, which means “mechanical”, are advanced Walkers that are piloted by one or more crew rather than being an individual mechanical suit. These walkers are often bristling with weaponry and have more Core Systems than vehicles of the same size.

· Command Vehicle: Enhanced Command and Allows Pilots or Crew to use their Command

Dual Armature Weapon Mounting: Walkers may take two of the same weapon types on each armature mounting combining them into a dual weapon mounting controlled by a single crew member. Both weapons attack as a single weapon increasing the number of shots or attacks from the weapon has.

* A single crew member is used to fire each armature weapon. Dual Armatures are considered a single weapon. Any weapon known by your faction can be mounted, including melee combat weapons. As normal, Mecha are vehicles and are limited in the strength of the weapon mounted by their toughness.

Powered Armor offers great protection to the soldier of the far distant future. Created from advanced Ceramic Polymers and Titanium plating over an exoskeleton with its own power system to offer a wide variety of systems enhancements to its wearer to give the advantage on the battlefield.

Powered Combat Armor: Armor 3, Core Systems 4 - A frontline Combat Suit with able to take the soldier into the center of the battle


There are plenty of additional options not represented here, but this is a fun preview of what is coming for the 3rd Age.

Up Next: A Look at Monsters in the Birth of Genesys

The 2nd Age will bring The Genesys Project to the Modern era and into the near future. Along with that will come new concepts and options for all Five Domains. One of the primary design elements of the 2nd Age is being able to design tanks and vehicles for your faction.

One of the biggest advantages of designing your own armored fighting vehicles (AFVs) is a wide choice of weaponry, armor, transport capacity, and secondary systems for your vehicles. As you can customize your own cannons and machine guns, this provides an extremely wide variety of AFVs that can be fielded.

Core Systems give you the capacity of equipment and weapon systems that can be fit into/onto the vehicle. How many Core Systems that can be added to a vehicle depends upon the vehicle’s size. There are several different sizes of vehicles each with their own base characteristics that can be expanded upon. Through the Traits system you may have advanced vehicles with additional Core Systems allowed, as well as other types of near-future upgrades. Here’s a quick list of the basic vehicle types:


These are a few examples of Core Systems that can be applied to your vehicles:


These are a few examples of Weapon Systems that can be applied to your vehicles:

There are plenty of additional systems not represented here, but this is a fun preview of what is coming for the 2nd Age.

Next Up: Customizing Mecha and Powered Armor in the 3rd Age